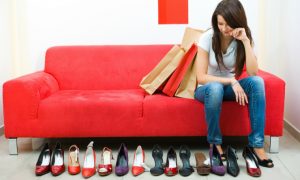 There’s nothing like an exciting spending spree to raise your spirits when you’re feeling down. What could be more fun than hitting the mall with friends and hunting for the perfect item or the best bargains? Most people can stop at the occasional outing – but for some, the temptation to shop is irresistible. And shopping, like many other pleasurable activities, can become destructive when taken too far.

Though shopping addiction is not a new condition, being recognized nearly two hundred years ago, and first cited as a psychiatric disorder in the early twentieth century, experts are undecided as to whether many so-called shopaholics suffer from true addiction disorders; the term is, in fact, often used flippantly to refer to anyone who loves to shop. But there’s a vast difference between the recreational shopper and the true addict. Shopping can be legitimately considered an addiction when it has the same effects on the addict as any other substance abuse: if the behaviour is destructive to that person or their loved ones, is causing irreparable harm, or leads to immoral or illegal conduct.

Some shopaholics spend far more time and money than is affordable on their habit. They neglect other responsibilities, and even use shopping as a way to escape feelings of anxiety, depression or anger. They are addicted to the rush of endorphins and dopamine produced by spending money; they, anticipate, plan out and crave the act of shopping in same way a substance abuser anticipates their next hit. Predictably, after the ecstasy comes the emptiness; the shopper crashes, and may feel disappointed in themselves, and guilty for their actions.

Far too often, the purchases go unused, hoarded away, sometimes returned to the store, sometimes hidden away as shameful reminder of their surrender to temptation. The shopper falls further and further into debt, and usually hides this by applying for more credit with the intention of paying off what they owe; inevitably, the new credit is used for more purchases, as the shopper tries to escape their negative feelings and self-critical thoughts.

The true shopaholic feels a compulsion to buy – even when they’ve already spent far more money than is wise. The advertising and marketing that surrounds us all on a daily basis is a minefield for the compulsive shopper, reminding them at every turn that their chosen high is just a quick transaction away. The addict is unable to resist their impulse to spend money, though they may be risking their financial future and their relationships with their loved ones. As such, though there is no physical harm done, the compulsion is comparable to any other true addiction and may require treatment to overcome.